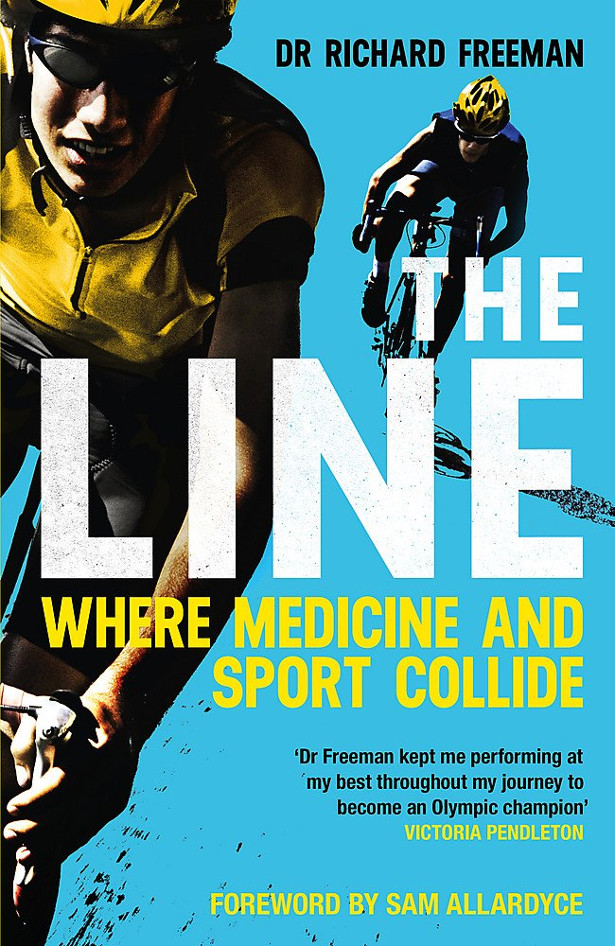 ‘Dr Freeman is a man of great integrity and kindness. His care has helped me through the good times and the hardships of competing in the highest level of sport’ – Sir Bradley Wiggins

As team doctor for British Cycling and Team Sky, Dr Richard Freeman treated the world’s most successful cyclists, such as Sir Chris Hoy and Sir Bradley Wiggins, Laura Trott and Victoria Pendleton. From 2009 until 2017, the ‘Doc’ was part of the team who became national heroes with Olympic and Tour de France victories.

In The Line, Dr Freeman reveals the medical principles and practices that helped lead these athletes to success – ideas that we now consider commonplace, but many of which were in fact the Doc’s own innovations. And in a sport where there’s an ethical line as well as a finishing line, Dr Freeman gives a frank and open account in response to allegations of misuse of medical treatment to enhance performance.

‘There are many fascinating issues – personal, medical and ethical – documented in The Line, but cycling enthusiasts will perhaps be most fascinated in the detail of how elite athletes train’ – Matthew Syed, The Times

THE STARTING LINE; THE FINISHING LINE; THE ETHICAL LINE – in an extraordinary new book, the former Team Sky and British Cycling doctor lifts the lid on the medical science that helped bring Britain’s most brilliant athletes to glory

Dr Freeman is a man of great integrity and kindness. His care has helped me through the good times and the hardships of competing in the highest level of sport (Sir Bradley Wiggins, Olympic champion and Tour de France winner)

There are many fascinating issues – personal, medical and ethical – documented in The Line, but cycling enthusiasts will perhaps be most fascinated in the detail of how elite athletes train (Matthew Syed The Times)

Knowing Dr Richard Freeman as I do, I can promise you this: you’ll be a much better prepared and informed sportsperson as a result of reading this book (Sam Allardyce, former England and Premier League football manager)

BMX is a war of attrition. Without Dr Freeman, my career would have been shorter and less successful. From becoming World Champion, to keeping my Olympic dreams alive after major injuries just months before the London and Rio Olympics. Dr Freeman was there through it all, always with my health his priority (Liam Phillips, BMX World Champion)

Dr Freeman is a compassionate doctor who is fully committed to a patient-centred focus (Dr Steve Peters, author of The Chimp Paradox and team psychologist at Team Sky)

Dr Freeman is one of the foremost sports doctors with a true compassion and care for the people he works with. The ability to treat the person whilst prioritising their performance needs is a rare skill he possesses (Paul Manning, Olympic Team Pursuit champion and Olympic Women’s Team Pursuit coach)

Doctor Freeman is a pioneer in medical performance services in recovery and preparation for world class sports teams and athletes. In my opinion number one in his field (Mark Taylor, Performance Director – Blackburn Rovers, Bolton Wanderers, Newcastle United, Fulham FC and Sunderland FC)

Doc Freeman was a great support during my time at Team Sky. He was always a relaxed and confident doctor, even in pressured situations and was just a joy to have around. You felt like he really cared about your health, making sure he always stayed in touch and across everything whenever I was recovering from being sick or injured. Not only is he a brilliant doctor who I loved working with, he was also just a great person to talk to, always understanding the human side of what can sometimes be a fickle sport (Ritchie Porte, Pro Tour Cyclist)

Dr Freeman has been a source of unwavering support throughout my cycling career through all the ups, downs, illnesses and injuries that I encountered through my career (Jo Rowsell-Shand, Olympic Team Pursuit champion)

You feel safe and know your rider’s health is well looked after when he is around, especially in stressful situation at competition. Dr Rich’s calm, professional and rational attitude gives everyone around him the confidence that all has been done for the athlete in order to be 100% able to focus on the job (Heiko Salzwedel, Olympic Men’s Team Pursuit coach GB, China, Russia and Denmark)