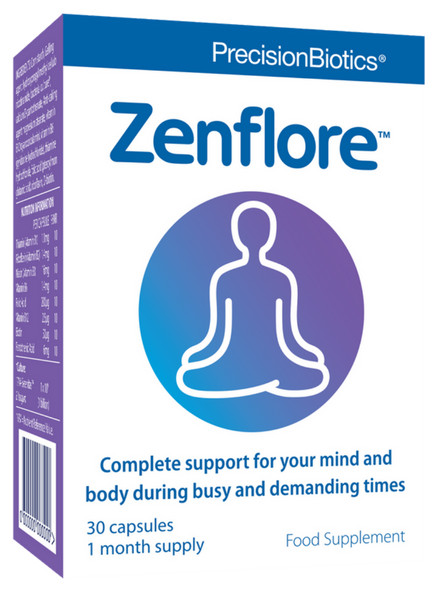 616,000 people between 30 and 55 suffered stress in the last 12 months in Ireland. Mild to moderate stress is pervasive, with feelings of worry the most common manifestation reported by 37% of those surveyed. 23% had headaches and 17% sleep disruption, whilst others testified to fatigue, upset stomach and aching muscles.

While short bursts of stress will pump enough cortisol, also called the stress hormone, round the body to meet work deadlines; get children to school on time; or survive the daily commute, however stress in excess or over a protracted period can impact our health.

Now scientists have discovered a good bacteria which can reduce the level of our stress hormone, cortisol. The scientists at PrecisionBiotics® – who discovered this natural 1714-Serenitas bacterial culture – have now harnessed it to create Zenflore® to support the mind and body during demanding times. This culture has been shown to increase the activity in the areas of the brain associated with emotions, learning and memory. It does this by becoming part of the gut microbiota that plays a role in the dialogue between the brain and the gut. 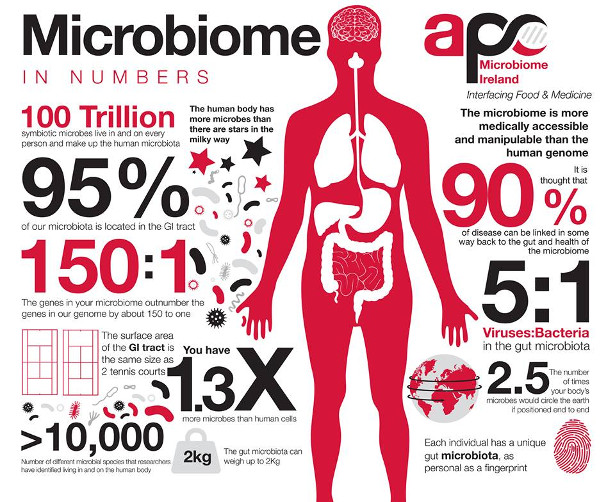 The scientists at PrecisionBiotics have been working with two leading researchers, Professor Ted Dinan and Professor John Cryan at a world renowned research institute – APC Microbiome Ireland, based at the University College Cork (UCC) – where the primary focus is the gut brain axis. Ted Dinan is also Professor of Psychiatry at UCC. His primary research focus is on the role of the gut microbiota in influencing brain function and development. John Cryan is Professor & Chair, at the Department of Anatomy & Neuroscience at UCC.

John Cryan’s research is focused on understanding the interaction between brain, gut and microbiome and how it applies to stress, mood and immune-related disorders. He has edited three books including “Microbial Endocrinology: The Microbiota-Gut-Brain Axis in Health and Disease” and has also presented a TED talk on the subject.

Their work has shown that there is a direct connection between our brain and our gut. In scientific terms, the gut-brain axis is the two-way dialogue between the brain and the gut. Its main job is coordinating brain and gut functions, by transmitting information from the gut to the brain, and the brain to the gut. The vagus nerve is a key physical link that relays the information between the two, it is the largest nerve in the body, outside of the spinal cord, and 80-90% of the nerve fibres in the vagus nerve go from the gut to the brain.

Together Professor Cryan and Professor Dinan have recently published ‘The Psychobiotic Revolution’ – to critical acclaim. This ground-breaking book looks at the discovery that a person’s state of mind is intimately connected to their gut:

The gut produces 90% of the serotonin found in the body and scientists have found that bacteria can influence its production in the gut- this neuro-transmitter in the brain can affect a person’s mood and feelings of happiness and pleasure – It was discoveries like this that led to the research, that ultimately resulted in the development of Zenflore®.

Sleep disturbance was the main way stress affected marketing consultant Gemma Kennedy. She has been taking a single Zenflore® capsule every day for two months and says she is “super impressed” with the results. She explains: “I feel I’m coping better with stress, I’m less tense and so I’ve slept through the night, without waking to stressful thoughts for the past three weeks, which is almost unheard of for me. I fall asleep with ease and, when I wake in the morning, I feel well rested and don’t struggle to get out of bed.”

She also has an inflammatory reaction to stress and added “Most interestingly, my skin is the best it’s been without being on antibiotics [for rosacea and acne]. I’ve had hardly any breakouts and the redness has reduced significantly. I’ve never experienced such results with a supplement.”

Zenflore® was developed by PrecisionBiotics®, the company which also developed Alflorex®. The 35624® culture in Alflorex® is the only bacterial culture to have shown reduction of digestive issues in two well-controlled clinical trials led by scientists and gastroenterologists in the UK and Europe. As a result, it is the number one recommended culture by US gastroenterologists3 and was winner at the Irish Pharmacy News OTC Awards of Best Natural Product 2018 and Best GI Product in for 2016-17.

Just one easily swallowed Zenflore® capsule is taken daily with or without food and at any time of the day, and no refrigeration required. – With added B vitamins included in each capsule, Zenflore provides a complete support. It costs approx. €1 per day (€32.95 for a month’s supply) and is available from all good pharmacies and selected health food stores. To find out more, visit www.precisionbiotics.com